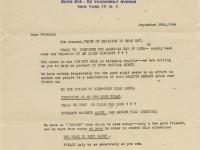 The Cold War was sparked by the immediate aftermath of World War II. The Allied Forces were divided by ideology and quickly separated into two camps: the Western democracies, led by the United States, and the Communist nations, dominated by the Soviet Union. This alignment served as the basic framework of the Cold War over the next fifty years, from 1947-1991. As America positioned itself in opposition to totalitarian regimes, American citizens were forced to confront realities of what “freedom” meant, or should mean.