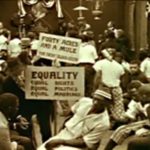 In this lesson, students learn how The Birth of a Nation reflected and influenced racial attitudes, and they analyze and evaluate the efforts of the NAACP to prohibit showing of the film.

James Patterson provides an overview of the movement, reminding us that the roots lay in the early twentieth century with the founding of the NAACP and the National Urban League and that efforts to secure equality continued through the 1940s and the postwar years. Patterson shows the variety of arenas in which the modern civil rights movement operated, from the courtrooms and legislative halls of the nation to the streets of Birmingham and the highways of Alabama and Mississippi. Free registration for students and teachers required to access resource.

In this lesson, students will view videos to hear eyewitness accounts of what occurred while Emmett Till was visiting family in Mississippi. They will learn about the timeline of events, how they unfolded and the subsequent trial for the men involved. Students will also consider the impact this had on the Civil Rights movement and the legacy.

iCivics presents a series of short, animated videos that examine the actions and accomplishments of civil rights activists of the 1950s and ’60s. Barbara Johns, Constance Baker Motley, and J.D. and Ethel Shelley, these figures probably haven’t made it to your textbook, and yet their contributions have helped shape our nation in insurmountable ways. Videos are assignable, end with questions for generating classroom discussion, and come with a downloadable Teacher’s Guide. Visit a video’s lesson page to view or assign it and access the guide.

In this lesson, students will read about a Kansas child involved in a famous United States Supreme Court case. They will think critically to form opinions about equality, segregation, and integration, and will distinguish between fact and opinion.