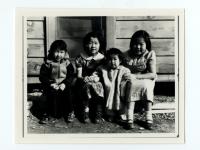 On February 19, 1942, President Franklin D. Roosevelt issued Executive Order 9066, which gave the military broad powers to ban any citizen from a coastal area stretching from Washington state to California and extending inland into southern Arizona. For the next four years, more than 120,000 persons of Japanese ancestry—77,000 of them American citizens—were removed from this area and incarcerated indefinitely without criminal charges or trial. Forty-six years and eight presidents later, on August 10, 1988, President Ronald Reagan signed the Civil Liberties Act of 1988 into law.