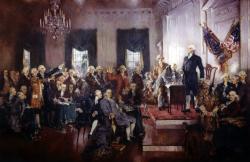 This short video discusses George Washington’s “infinite care in preparing the Constitution for posterity.” As Chair of the Constitutional Convention, Washington was most often silent, but he did cast a crucial vote in the Virginia delegation, resulting in the adoption of the Connecticut Compromise. Professor W. B. Allen emphasizes the role played by Washington in providing leadership and structure as the principles of the Constitution were argued and articulated.