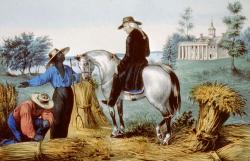 This short video analyzes Washington’s experiences as a “queasy slaveowner.” Having inherited and traded slaves as a younger man, Washington in later life gradually moved from being doubtful about the morality of the institution to being certain that the institution was “against the law of nature.” Professor W. B. Allen contends that Washington’s decision to free his slaves upon his wife’s death ensured that Mount Vernon’s enslaved families would remain intact and would be provided for.