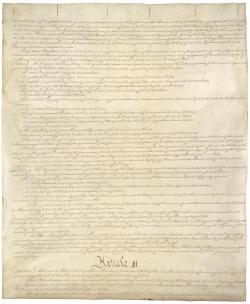 This short video suggests that George Washington’s vision for an American empire was intimately connected to his desire for constitutional ratification. Though he played no public role in the ratification debates, he was in constant contact with the Federalist supporters of the Constitution. As Professor W.B. Allen points out, Washington was aware of all the debates, but his influence was completely invisible to the public.