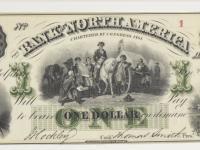 Capitalism and the American nation have long been bedfellows; after all, they are both the children of eighteenth century Neo-Classical Liberalism. It is worth noting that both the “Declaration of Independence” and Adam Smith’s “Wealth of Nations” were presented to the public in the same fateful year of 1776. However, the America of Revolutionary days certainly was neither the financial nor business force that it is today, and understanding how the nation came to be so closely linked to capital is an important understanding.