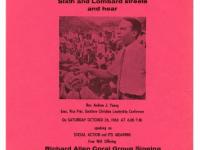 Throughout the twentieth century, blacks in Pennsylvania employed numerous strategies to achieve the civil rights they deserved. Their efforts for to receive their rights began with a strategy of New Deal liberalism in the 1940s and 50s headed by prominent black leaders. When attempts to rewrite the laws using the established political system failed, black leaders encouraged more direct action, like boycotts and sit-ins. The movement quickly took on a black nationalist approach. Philadelphia became the perfect place for several Black Power conferences and home of the short-lived, though active, Black Panther Party.