Tension between the states and the federal government has been a constant throughout U.S. history. This video explores the supremacy clause in Article VI of the Constitution and key moments in the power struggle, including the landmark case McCulloch v. Maryland. In McCulloch, Chief Justice John Marshall wrote that the supremacy clause unequivocally states that the “Constitution, and the Laws of the United States … shall be the supreme Law of the Land.” 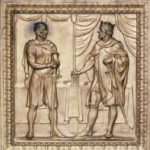 Is the Legal Arizona Workers Act invalid under the Immigration Reform and Control Act? This case summary shows how the Supreme Court answered that question in 2011.