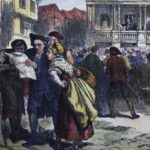 This short video highlights the importance of popular sovereignty in the ratification debates. The people themselves, through their elected delegates in specially-called conventions, voted up or down on the new Constitution. Professor John Kaminksi notes how the Antifederalists also used the principle of popular sovereignty to justify their call for constitutional amendments.

What are the three foundations of American democracy and how do they work together? Explore the National Constitution Center’s Foundations of Democracy learning module to uncover the connections between popular sovereignty, natural rights, and rule of law. 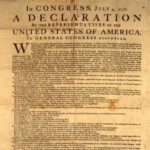 The major ideas in the Declaration of Independence, their origins, the Americans’ key grievances against the King and Parliament, their assertion of sovereignty, and the Declaration’s process of revision. This lesson will focus on the views of Americans as expressed in primary documents from their own time and in their own words.

The objective of this lesson is to help students realize that the Constitution does affect them and have them come to the conclusion that they have to be an informed citizen and be careful of the sources they use to do the research.

History is the chronicle of choices made by actors/agents/protagonists in specific contexts. This simulation places students at the Constitutional Convention and asks them to engage with a problematic question: Who should have the final say in deciding whether a law or executive action is constitutional? Students will explore this in theoretical, practical, and political contexts. If one branch has the final say, does that negate the separation of powers? But if no branch has the final say, how are inter-branch disputes to be settled? If unelected justices of the Supreme Court can nullify legislative and executive measures, does that fly in the face of popular sovereignty? On the other hand, if constitutional interpretation is left to “the people,” how might that work, and might that lead to political turmoil?

This guide, written by John J. Patrick, explains the core concepts of democracy in a clear A-Z format. The complete book is available for download. 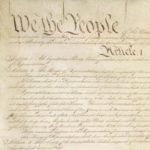 This lesson engages students in a study of the Constitution to learn the significance of “Six Big Ideas” contained in it. Students analyze the text of the Constitution in a variety of ways, examine primary sources to identify their relationship to its central ideas, and debate the core constitutional principles as they relate to today’s political issues. (Duration: 45-minute segments, up to 4.5 hours.)

Students will create visual metaphors to explain the seven principles of the Constitution. Students will practice their speaking skills as they explain their visual analogies to the rest of the class. Students will reflect on the big ideas and make personal connections to the material by recording their learning in a Learning Log during and after the presentations.