A set of government and politics infographics that teachers can print out for their students, use for their exams, or use to create posters for their classroom.

This short video analyzes both the practical and the psychological contributions made by Dolley Madison to the young republic. Practically, Dolley’s weekly receptions in the drawing room of the White House became the only public gathering place in Washington, DC for doing the real business of politics. Psychologically, Dolley became, in the words of Professor Catherine Allgor, a “Republican Queen”, whose charm and charisma made her a symbol of America during the War of 1812.

This lesson examines the process of local decision making and its need for citizen input and compromise. Students simulate a local city/county council session and advise the council on public policy. Students are asked to consider the viewpoints of different citizen groups in order to reach a compromise that will benefit the entire community. This lesson can be used with a unit on local politics and can be adapted to reflect issues of compromise in your school or community.

The state of the economy during the presidential election season has a significant impact on not just the approval rating of the incumbent president at the time, but also has an impact on the policies in which presidential candidates run on. Additionally, the state of the economy also influences who will come out to vote in that year. This year, 2020, it is just one of many factors that may affect voter turnout but the economy may be underestimated. This exercise will encourage students to evaluate how other fluctuations in the economy may affect the ratings, policies, and decisions of the 2020 presidential candidates.

Americans love to personalize their vehicles in a way you will not see in many other countries. This lesson explores political ideology by analyzing data on automobile purchases and bumper stickers. Students will learn generalizations about conservatives, liberals, democrats, republicans, libertarians, socialists and appreciate the American custom of advertising political thought in public.

Get first steps for creating a respectful yet vibrant environment for students to explore diverse ideas on controversial topics, from politics to profanity, religion to racism. Four guidelines and a debate leader checklist provide a foundation for those seeking to steer productive conversations about controversial subjects.

Street Law compiled this list of its case summaries that can be used as comparison cases to the 15 required cases in the redesigned AP U.S. Government and Politics curriculum. Note that this is not an exhaustive list—it only includes comparison cases that exist in Street Law’s Free Resource Library. 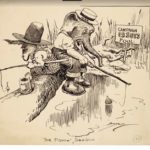 Using the political cartoons of Clifford Berryman, this lesson, developed in collaboration with the National Archives, has students consider the impact of political parties on politics, government, lawmaking, and voters. The heavy focus here is on breaking down and interpreting some powerful primary sources to learn more about the role of political parties.