What is the nomination process for Supreme Court justices and federal judges? Find out in a multimedia package of educational resources geared to high school students, their teachers, and interested adults. What do judges promise in the judicial oath of office? What is the role of justices and judges? What kinds of information are nominees asked to share during the nomination process? What do judges, themselves, say about what it means to be impartial?

Are you teaching about President Trump’s nomination of Judge Neil Gorsuch to the U.S. Supreme Court? Lead your students through an exploration of the process and have them take on a role as adviser to a senator in preparation for the Senate Judiciary Committee’s confirmation hearing.

Explore historical sources related to judicial appointments under the United States Constitution. A great resource to use during Supreme Court nomination debates to illustrate the original conflicts over the court and contextualize contemporary issues.

Primary season can be a wild ride. Voters narrow the field of candidates in contest after contest, while the parties use complicated rules to try to control who ultimately secures the nomination. 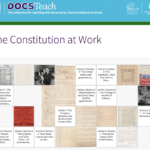 Conversation starter using a political cartoon, which compares the public’s interest in judicial nominations with contestants on the television show “American Idol.”