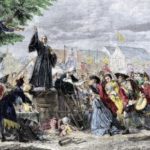 Civics on Call provides lessons on current news events. The latest lesson is on Containing the Coronavirus. All the lessons contain a fact-based article on the news event, then pose questions for writing and discussion.