The power of nonviolent actions and attitudes as a means to resist oppression and spur reforms is a recurring feature of democratic and democratizing societies. The School Violence Prevention Demonstration Program presents educators with lesson plans that explore the use of nonviolence in history, paying particular attention to the civil rights movement and African American history. Six lessons address: the 1963 Children’s March; the concept of nonviolence using primary sources and stories of participants in the civil rights movement; the power of nonviolence; the story of Rosa Parks; citizenship schools; how music can be used to achieve social and political change. 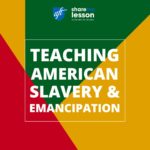 If you are lesson planning for the school year, or getting ready to celebrate Juneteenth — the June 19 holiday recognizing the abolition of slavery — this Share My Lesson collection has what you need to teach preK-12 students the history of American slavery. This preK-12 lesson and activity curated collection is in response to a Southern Poverty Law Center report, “Teaching Hard History: American Slavery,” that shows that schools are failing to teach American Slavery. This collection of resources features some of our partner and users’ best material to ensure schools and teachers have the support they need to teach about the history of American slavery. 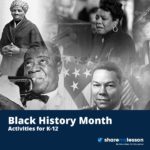 Freedom Summer is a digital learning tool (available on the web or as an app) for teachers and students that explores key events surrounding this time in America’s history and the impact of the civil rights movement on civil rights legislation. Players predict the outcomes of civil and congressional actions and discover how the events are intertwined. Students have the opportunity to view informative intro and outro videos and analyze 20 primary sources depicting images of civil rights events. Analysis of a variety of primary sources and supplemental information leads students to identify varying perspectives and potential outcomes. Freedom Summer is formatted for all types of computers and mobile devices, including Chromebooks, and can be found on the website or in any app store for download.

Video profiles of seven African American federal judges, who overcame obstacles on their paths to the bench, are featured on the federal courts’ website. In their inspirational first-person narratives, they recount the challenges they faced growing up and offer uplifting insights. The four-minute videos are part of the federal courts’ Pathways to the Bench series.

Few people know the legal mind of justices or judges as well as the law clerks who have worked with them. Justice Thurgood Marshall’s former law clerks offer unique insights into the character, values, and thought processes of the first African American to serve on the Supreme Court of the United States.  In this 8.5-minute video called “Moments in History:  Remembering Thurgood Marshall,” prominent lawyers reminisce about the examples of compassion and courage they saw in the life and work of this legal legend.

Nicknamed the “Moses of the Her People” for leading runaway slaves to freedom in the North, Harriet Tubman was the most famous member of the Underground Railroad. She became a celebrity in her lifetime and a hero of the Civil War. This lesson provides writing prompts and an activity on leadership.