The terrorist attacks on Sept. 11, 2001, stunned the nation. As commander-in-chief, President George W. Bush responded quickly but soon all three branches of government would be embroiled in the struggle to balance national security with the protection of individual liberties amid a war on terror. This lesson plan is based on the Annenberg Classroom video “Habeas Corpus: The Guantanamo Cases.” The four cases are examples of how the Supreme Court, the president and Congress fought to balance national security and civil liberties during the war on terror. At the heart of each case was the constitutional right of habeas corpus, the right to have one’s detention or imprisonment reviewed in court.

Do detainees at Guantanamo Bay have the constitutional right to challenge the legality of their confinement using a writ of habeas corpus? This case summary shows how the Supreme Court answered that question in 2008.

Does the Illegal Immigration Reform and Immigrant Responsibility Act violate the due process clause by suspending habeas corpus or limiting access to the courts? This case summary shows how the Supreme Court answered that question in 2001.

Did the Controlled Substances Act authorize the U.S. attorney general to ban the use of controlled substances for physician-assisted suicide in Oregon? This case summary shows how the Supreme Court answered that question in 2006.

Does the Detainee Treatment Act take away the Court’s authority over habeas petitions filed by Guantanamo detainees that were pending at the time of its passage? This case summary shows how the Supreme Court answered that question in 2006.

Can a U.S. citizen captured in Afghanistan, who the President claims was an “enemy combatant,” be detained indefinitely? This case summary shows how the Supreme Court answered that question in 2004. 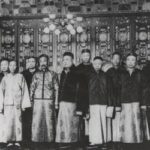 This documentary examines the case Yick Wo v. Hopkins (1886) in which the Supreme Court held that noncitizens have due process rights under the Fourteenth Amendment’s equal protection clause. A PDF lesson plan accompanies the video. The video A Conversation on the Importance of the Yick Wo Case complements the documentary.

Justice Anthony M. Kennedy discusses the landmark ruling in Yick Wo v. Hopkins (1886) in which the Supreme Court decided that the Fourteenth Amendment provides “equal protection of the laws” for noncitizens. This video complements the documentary Yick Wo and the Equal Protection Clause.