Home » Resources » Founding Documents: The Meaning of the Declaration of Independence. 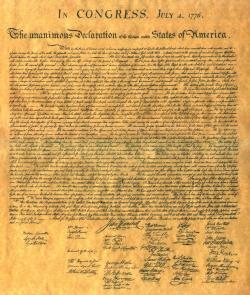 On June 8, 1776, the Continental Congress voted to write a declaration of independence. It named a committee to do the writing. One of its members was Thomas Jefferson, a lawyer from Virginia. He had been a leader in Virginia, and Virginia had elected him to the Continental Congress. The others on the committee were too busy with the revolution to work on the declaration, so Jefferson wrote it alone.